Round, pointy, pear-shaped, or pancake-like. These are only some of the shapes breasts come in! And that’s not even mentioning cup size, which can range from AA to H!

Breasts get a lot of attention because they’re visible. Also, American culture has a bit of a breast fixation, which can be considered immature. After all, in many European countries women appear topless on beaches and in women’s magazines because it’s not a big deal!

Girls often have issues with the size of their breasts. Girls with large breasts may feel that they attract too much attention or that heavy breasts cause back and shoulder pain . Girls with small breasts may feel that their breasts aren’t like the breasts on the covers of fashion magazines, that they’ll never feel or be as sexy as their busty friends, or that boys make fun of them for being flat. Also, there are a lot of false ideas about breasts. Some people think that girls with large ones are more sexually experienced and available (wrong!).

The truth of the matter is that different size and shaped breasts appeal to different people. (Think about it: Do you only like guys who have one specific shade of hair color?) Besides, what’s really important is the way you feel about your breasts and that, whatever their shape or size, you come to accept them as another unique and beautiful part of you!

Breast Growth Normally Starts Around age 8 to 11 (don't worry if you are a late bloomer it is perfectly normal!)

Breasts grow into a variety of shapes and sizes, and many girls' breasts remain small throughout their adult lives.

Your breasts will start as breast “buds”, small mounds beneath the nipple and areola. (The areola is the dark area surrounding your nipple.) One breast may start growing before the other, sometimes even 6 months before the other.

In the beginning, they may hurt sometimes and be tender when they are touched. But this will go away as your breasts become rounder and fuller. The nipple and areola also darken.

Many girls have breasts that develop unevenly; one breast may be bigger than the other. This is perfectly normal. Many women have one breast that is slightly larger than the other, but the difference in breast size usually decreases as your breasts develop.

Young women may have different breast sizes because of differences in families, hormones, and weight. Rapid development of breasts can lead to spoke-like stretch marks, but these will lighten with time. Towards the end of puberty, you may also grow a small amount of hair around your areola but that is totally normal, do not try to shave it off. 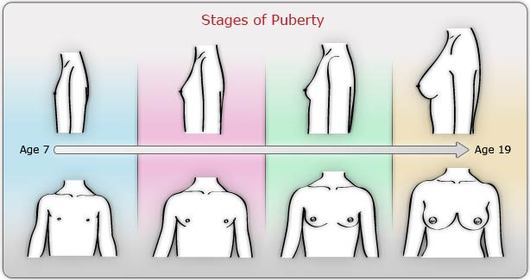 (Preadolescent) only the tip of the nipple is raised

buds appear, breast and nipple raised, and the areola (dark area of skin that surrounds the nipple) enlarges

mature adult breast; the breast becomes rounded and only the nipple is raise